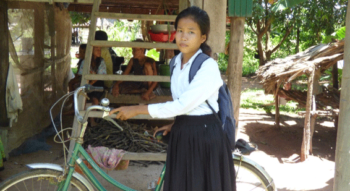 A girl Phat Minea, lives at Veal Krasang village, Takaen Commune which located in Chhuk district of Kampot province. Minea is 14 years old and learning at grade 7 in lower secondary school Trapang Bei which 3 kilometers away from home; additionally, she has received a good grade in class with her strong effort. Living only with her mother whom age 47 years old, Minea is having two siblings which her older brother Phat Samnang is moving to work as construction workers in the city (Phnom Penh) in order to earn to support the families in daily spending and sending his sister, Minea to school. 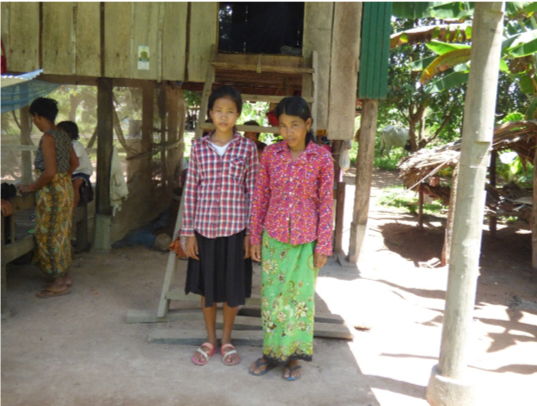 Minea’s family is extreme poor and the widow mother has chronic illness. Talking about her family, he left the family since daughter was little and married other lady; perhaps in Prey Veng province, and never come back to visit the children and without sending of any support. The mother played important role as mother and father alone to treat two of the children since then.
Currently they are holding Poor II ID card which recognized by the government standard of identification of poverty. The family has a small rice field which bought about 70A size before her father had left. Eventhough the land is small but family can grow and harvest to serve their needs in the period of time; however, because the mother is sick and in needs budget and human labor of ground plow, she couldn’t grow the whole rice field. Beside growing rice and monthly support from Minea’s brother, the mother has raising some chicken and ducks which could support her in dealing with her daily food and support Minea to school.
Referring to Minea class participation, she is an outstanding student and always receive top grade every annual of the academic. Nowadays, she has 4 hours per day but every of Tuesday and Friday she is having swop class between morning or afternoon. She also has an extra class 1 hour per day from Monday to Friday. Back from school, Minea, a good daughter, helps her mother in house chore such as cleaning house, cooking some foods, feeding chicken and ducks as well as reading her lesson.
Minea said “in the morning before going to school, I always help my mother to walk the cow to field, clean around the house and carry the water for day usage. I walked to school and sometime asking help from friend to ride bike with. After school, sometime in the afternoon, I helped my mother to walk cow back home. In rainy season, I assisted in transplant at rice field. Evening normally I help in cooking and feeding chicken and ducks.” She added “I never forget reviewing lesson before bed and complete my homework”.
Phat Minea raised up her challenge “because my family is poor so sometime I didn’t have enough money to school, sometime my mother couldn’t afford in buying me study materials, school uniform and no vehicle to ride and the school is located far from home; moreover, during rainy season, I find it really hard to walk to school and sometime I shamed to ask for help from friend since they had been helped often.” She continued, “I am so worried and sad every moment I think of my mother’s illness and saw her hardship in making money to support my education. I was exhausted somewhat in doing house chore after school but I have to help my mother in return”.
Even though the family situation is struggling but she never thinks of give up her effort in pursuing her education and life goal of being a teacher in the future. She stated confidently that “I will never give up although my family is poor and hard but I will try my best to finish my education. I want to be a teacher in the future because I want to help other children in promoting literacy and out of negative social action.” Minea also expected to encourage poor children and have better income to support her family in return.
She spoke with her sadness “if any NGOs support my education or support my education materials, I will do my best in making good grade until I can get better job to support myself and family”.
Seeing her family in difficult situation and her strong commitment in pursuing education, COCD with the cooperation from village chief at Veal Krasang sponsored the study materials in order to give encouragement and reduce burden of the mother. Moreover, Minea also received one bikecycle in 2017 which she can cycling to schools every day.
After receiving the support and bikecycle from COCD, she stated ”I am so happy to get the support and encouragement from COCD. I would like to give my respect and deepest thanks to COCD as a whole. I am committed to study hard and will never give up my passion” 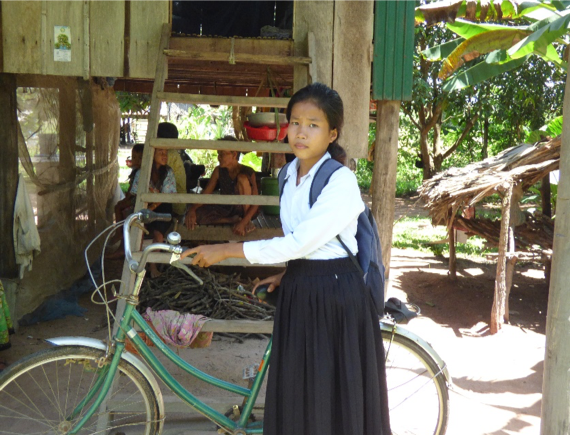 Mrs. Pon Srey Mom known as the mother told us that she was so sad because she is poor and less ability to purchase her children even study materials and cloths as other mother did. She continued “I am thankful to COCD for this kind contribution and I promise to keep my daughter in school and urge her to finish her schooling”.
The village chief of Veal Krasang also spoke “this family has extreme poor compare to other family in the village. Minea’s father had already left family without contribute any treatment to children. I am also happy working closely with COCD and seeing this kind of support to her family”.
Last but not least, according to the observation and questioning with Phat Minea’s family, we can conclude that both daughter and mother were smiling from the bottom of her heart after receiving the attention and support from COCD. Anyway, village chief and neighbors also excited instead of her family since her truly extreme poor condition.