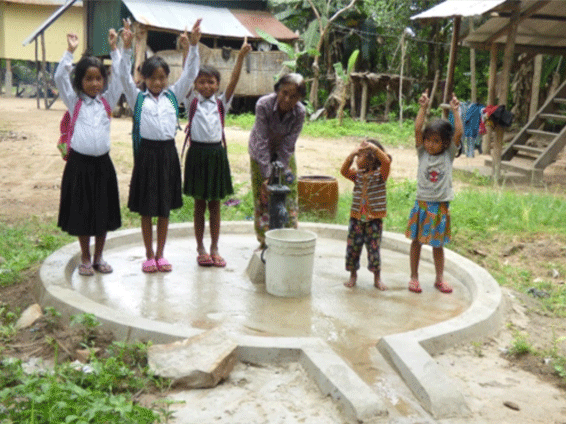 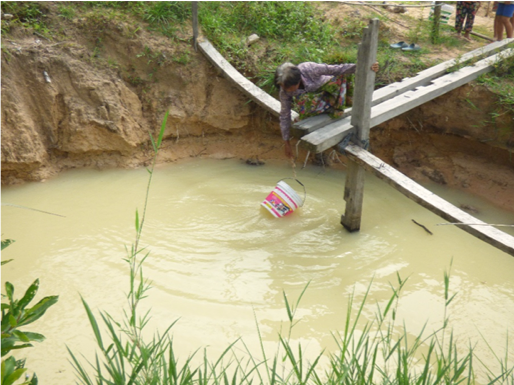 She is a poor widow with health equity card. Its number is 0807030-0123. She said that her family, since her husband survived, was a livelihood through firewood sales and construction work to support her family’s daily life. She continued” Since my husband passed away to my life, I have been very difficult because there is no farmland to do farming, I get older, live depend on my children, and neighbors. Anyway, I am busy with taking care of grandchildren that I have no time for making money”. A poor widow lady raised her voice” nowadays, I solve this problem through selling vegetables to my neighbors in order to make a little money for buying food for my family , even I work hard, I am still lack of food for families because I am jobless but my high risks is lack of source of clean water every day! In fact, my own and my neighbors have paid for purchasing water once that it costs $ 10 ( Ten dollars) and is used for half a month only.” If I do not buy, I spend a lot of times collecting water away from my homes, sometimes I take small children along with me and then their Learning were slow and sometimes they went to school late. At that time, my grandchild also use unclean water, which was seriously affected to their health as some companies and farmers used toxic chemicals on fruits and vegetables, and they flow into their source of daily water.”
As the result, this old widow lady, Mrs. Som Aun, was sick on typhoid and came to a private clinic in Chumkiri District and Doctor checked on her health by blood checking, she said that due to lack of hygiene and poor drinking water as a consequence, the poor widow charged the total cost of treatment was 150,000 riel. On April 27, 2018, Cambodian Organization for Children and Development (COCD), provided to a pump well for 16 households that lacked water sources for both seasons (Dry season and rainy season).
Villagers are no longer concerned about health issues, because she uses the source of clean water provided by COCD. While existed this pumping facility, my family was less sick and had not spent the money to cure the illness, and the grandchildren and other children in the area took three baths a day to clean themselves, and they went to school on time, said by an old widow. She continued “If there is no this project for construction of water well, I and my neighbors still continue to use unsafe water and often get sick and spent a lot of money to clean water that is the root cause of poverty.” 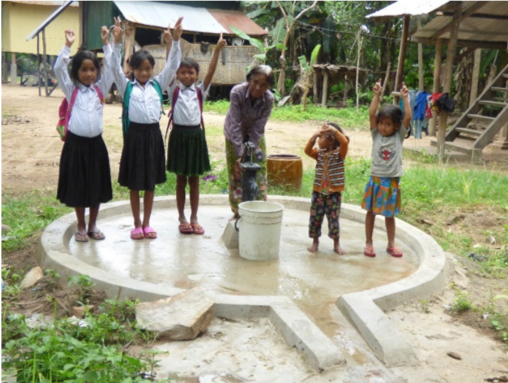 Finally, She would like to give deep hank to COCD as well as Donor that they are kind to all villagers here for provision of water well. She said “I live in a better way, with my family healthy condition and they go to school on time and then I continue practicing only safe drinking water and selling vegetables, now I plan to save money to buy a pig for raising in the future.”